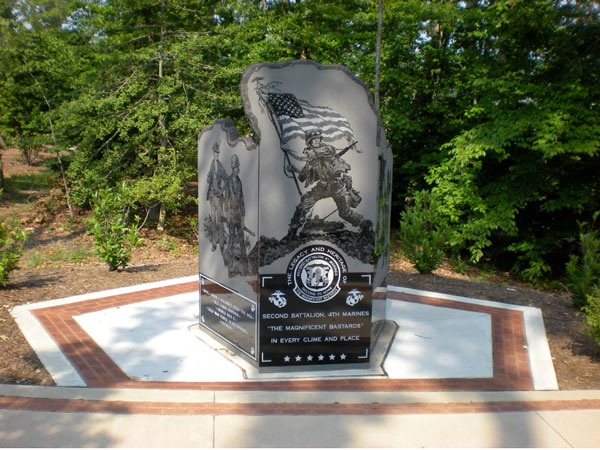 The Navy Marine Corps team in action on the battlefields.

The 2d Battalion, 4th Marines (2/4) Monument is located along the Semper Fidelis Memorial Park Trail, adjacent to the National Museum of the Marine Corps in Triangle, Virginia.  The monument lies midway between the Memorial Chapel and the Lt General Lewis B. “Chesty” Puller Overlook – less than 100 yards from each.

Portraying “Every Marine is a Rifleman,” the black granite 2/4 monument stands over eight feet tall and features Marine riflemen of various eras, from 1914 to the present. In addition, there are battlefield action figures of a Navy Corpsman and Chaplain which illustrate the Navy/Marine Corps team at the “grunt” level. Chief Warrant Officer Edward Sere, USMCR (Ret), designed the magnificent, five sided monument. Renowned artist, Colonel Charles Waterhouse, USMCR (Ret), created the figures.  The Modlich Monument Company of Columbus, Ohio, skillfully inscribed the Waterhouse figures and installed the monument.  The five sided base of the 2/4 Monument summarizes the battle history of this famous battalion from early 20th century small wars to the present day war on terror.

The 2/4 Monument was dedicated on 2 May 2009.  General Paul X. Kelley, former 2/4 Battalion Commander and Marine Commandant, was the guest of honor and principal speaker.  Among the many distinguished visitors were General Carl E. Mundy, former 2/4 Commanding Officer and Marine Commandant; General Alfred M. Gray, former Commandant and good friend of 2/4; and, General James Mattis, Commander, Central Command, and former 2/4 Rifle Platoon Commander.  Prior to the ceremony a memorial service was conducted by the Marine Corps Chaplain.

Surrounding the base of the Monument are bricks paying tribute to members and friends 2/4.  The two front rows include the names of all six 2/4 Medal of Honor recipients.  The remaining bricks in these two rows memorialize Marines killed in action, including Corporal George Frazee, killed in Santo Domingo in 1916 and Christopher Boyd, killed in Afghanistan in 2010.  Corpsmen known to have been killed in action are located adjacent to the Corpsman panel.  The other bricks pay tribute to other Marines killed in action, former 2/4 members, soldiers, sailors, allies, families and friends.

The 2/4 Monument and the National Museum of the Marine Corps sit on hallowed ground.  Generals Washington and Rochambeau passed through as they lead their armies to defeat General Cornwallis at Yorktown and end the Revolutionary War.  The sounds of Civil War battles at Manassas and Fredericksburg could be heard from the site and the armies of both sides marched through the area many times.  Untold thousands of Marines have been trained and continue to be trained on this ground prior to “fighting our country’s battles in the air, on land and sea.” Finally, the Marine Corps Museum tells American history through the eyes of the Marine Corps, and the 2/4 Monument reminds Americans that freedom is not free.

On 2 May 2018, another portion of the walkway near the chapel of the National Museum of the Marine Corps was dedicated to complete the project to honor all Marines and Navy personnel attached or assigned to the Battalion since its’ inception in 1911 who died in combat or as a result of wounds received in combat.  This section of the walkway is located below the chapel between the Tank Monument and Pearl Harbor Monument.