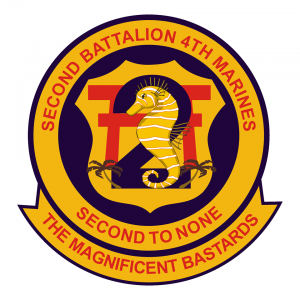 As per traditional heraldry, the battalion coat of arms is a composition of references to past deeds and honors. The basic colors of the insignia that makes up 2nd Battalion, 4th Marines’ crest are scarlet and gold, the historic dress and display colors of the Marine Corps The blue background signifies the battalion’s role as “Soldiers of the Sea“. The “Sea Horse” symbolizes our amphibious nature. The “Palm Tree” represents the battalion’s duty in the Caribbean and Hawaii. The “Torri” represents our tours of duty in the Far East. The Motto “Second to None” is self-explanatory.

The present coat of arms was designed and reproduced by Lieutenant Colonel Doxey, the Commanding Officer, 2nd Battalion, 4th Marines, from 11 September 1963 to 3 June 1964, and his wife. In 1964, Lieutenant Colonel “Bull” Fisher modified the insignia by adding the lower pennant and the words “The Magnificent Bastards“. The coat of arms was made official by subsequent Commanding Officer, A. E. (Gene) Bench, in Battalion Order 5600.1B (24 Sept 1966).