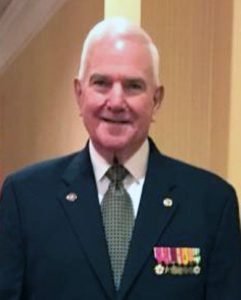 Lt. Col. George Frederick (Fritz) Warren USMC Retired, 86, of Kailua Kona, Hawaii, died October 8th at his residence, surrounded by his family. Born January 16, 1933 in Jacksonville, Florida he was one of 14 children. He attended the Naval Academy graduating with the class of 1957 and served as a United States Marine until 1975. He served on the USS Missouri as well as completed a tour in Vietnam during his career in the military. He also had a full career as a Certified Public Accountant and worked as the Chief Financial Officer for the Navy Marine Corps Relief Society. He retired at the age of 75 and moved to Kailua Kona.

Fritz was a vibrant member of the Kailua Kona community and St Michael’s Church. He volunteered his time at the Life Care Center and at the Innovation Public Charter School over the past ten years. Fritz was loved by many and gave his heart to the things he believed in. He always saw the beauty in everyone and was quick to offer a smile, assistance, his love and his resources to others. Most of all, Fritz was a Marine. He loved the United States Marine Corps. Semper Fidelis, “Always Loyal” and “Forever Faithful” was the way Fritz lived his whole life.

His first wife, Barbara Warren of Kailua Kona preceded him in death in 2013. He is survived by his wife, Jacquelyn Moore Warren of Kailua-Kona and formerly of Dothan, Alabama; children Catherine (James) Hawkins of Kailua Kona, George (Patricia) Warren of Indiana, Joseph (Rika) Warren of Indonesia; Jacquie Sue (Jed Rosenstein) Morris of Spain and Max Morris of Dothan, Alabama; brother, Denis Warren of Florida and sister, Anne (Monty) Montgomery of Louisiana and grandchildren: Cru, Katrina, Vincent, Jade, Mingxia and Gia. He also had numerous step-grandchildren, great grandchildren, nieces and nephews. He is also survived by his loyal dog, Lady.

A celebration of life will be held at St Michael’s Church in Kailua Kona on October 25th. Visitation begins at 1.30 pm, to be followed by a 3 pm mass and reception.