Marine Corps Loses One of Its Greats

MARINE CORPS LOSES ONE OF ITS GREATS

From the desk of LtGen John Broadmeadow, USMC: 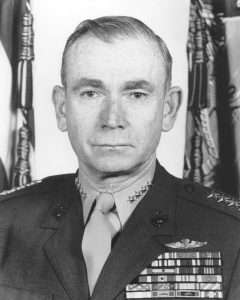 Paul Xavier Kelley, born November 11, 1928, was commissioned a second lieutenant in the United States Marine Corps in June 1950 through Villanova College’s Naval Reserve Officer Training Corps program.  After The Basic School in March 1951, he served with the 2nd Marine Division at Camp Lejeune, North Carolina, as an infantry officer in a wide variety of billets, including his first assignment to Aircraft Engineering Squadron-12 (AES-12) out of Marine Corps Base Quantico in Virginia.  In September 1952, he was assigned to the USS Salem (CA-139), where he served for 20 months, first as executive officer and then as commanding officer of the Marine Detachment on the Salem.  In December 1953, he was promoted to captain.

From July 1956 to December 1957, Kelley served as the Special Assistant to the Director of Personnel at Headquarters Marine Corps, Washington, D.C.  He then completed the Airborne Pathfinder School at Fort Benning, Georgia.  In February 1958, he was assigned to the newly activated 2nd Force Reconnaissance Company, Force Troops, Fleet Marine Force, Atlantic, Camp Lejeune, when he served as the executive officer and then commanding officer.

From September 1960 to May 1961, Kelley was the United States Marine Corps Exchange Officer with the British Royal Marines, becoming one of the few foreigners to earn the Royal Marines Commandos’ coveted green beret.  During this tour, he attended the Commando Course in England, served as Assistant Operations Officer with 45 Commando in Aden, and as Commander “C” Troop, 42 Commando in Singapore, Malaya and Borneo.  On March 1, 1961, he was promoted to major.  From June 1964 until August 1965, Kelley became Commanding Officer, Marine Barracks, Newport, Rhode Island.

In 1965, Kelley deployed to South Vietnam.  He first served as the Combat Intelligence Officer for the 3rd Marine Amphibious Force, FMF, Pacific.  Following this assignment, he served as the Commanding Officer, 2nd Battalion, 4th Marines in combat.  He was promoted to lieutenant colonel on January 20, 1966.  During his tour as battalion commander, he earned the Silver Star, the Legion of Merit with Valor device and two awards of the Bronze Star Medal with Valor device.  Four years later, from 1970 to 1971, Kelley commanded the 1st Marines, which was the last Marine regiment in combat in Vietnam.  He earned a second Legion of Merit during this deployment.

In 1989, Kelley joined the Washington, D.C. public policy firm Cassidy & Associates; he was the Vice Chairman Emeritus.  From 1989 to 1994, he served as Chairman of the American Battle Monuments Commission.  Kelley was on the board of directors for a number of corporations, including Allied Signal, Inc., GenCorp, Inc., Saul Centers, Inc., Sturm Ruger & Co., Inc.; and the Wackenhut Corporation.  In December 2006, Kelley chaired a panel of military and business leaders looking to improve the United States’s energy security.  They recommended tougher emission standards and greater access to offshore United States gas and oil reserves.

On July 26, 2007, the Washington Post published an op-ed by Kelley and Robert F. Turner, in which they warned that the July 20, 2007 executive order issued by President George W. Bush, purporting to define torture and allowable interrogation methods, appeared to violate Common Article 3 of the Geneva Conventions and thus expose the President and other persons to potential liability for war crimes.  On November 9, 2010, he was named an honorable Reagan Fellow from Eureka college.  Kelley was currently sitting on the Honorary Board for the 501.c(3) Non Profit Wine Country Marines when he passed away 29 December 2019.

General Kelley will lie in repose on 19 January 2020 (1400 to 1700) at Joseph Gawler’s & Sons Funeral Home at 5130 Wisconsin Avenue Northwest, Washington, DC 20016.  All are invited to attend.  General Kelley will be laid to rest at Arlington National Cemetery.  The memorial service will be held at the Memorial Chapel, 101 McNair Rd, Fort Myer, VA 22211.  The date and time will be published via separate correspondence.  We estimate two to four months for the interment.  Please contact me if you have any questions or concerns.

The memorial service will be held on Thursday, 13 February at 0900 in the Fort Myer Memorial Chapel located at 101 McNair Rd, Fort Myer, VA 22211. Interment will follow in Arlington National Cemetery.  Uniform for the service is Blue Dress B, (with ribbons and badges) or equivalent.

The visitation remains as previously noted.  It will be held on Sunday, 19 January (1400-1700) at Joseph Gawler’s Sons Funeral Home located at 5130 Wisconsin Avenue Northwest, Washington, DC 20016.   All are invited to attend.  Uniform for the visitation is Service A, with ribbons and badges or equivalent.