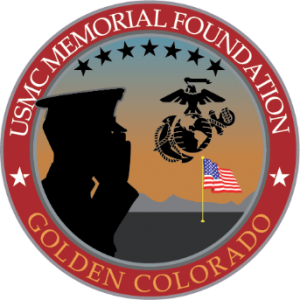 The United States Marine Corps Memorial was dedicated by Cmdt Louis H. Wilson in August 1977 and has remained a stopping point for Marines & other veterans traveling east and west on Interstate 70 in Golden, Colorado since then!  It’s a place for serving, remembering, honoring, healing, celebrating and teaching. When built it was the only US Marine Corps Memorial west of the Mississippi and was the last thing you saw leaving Denver to the West and the first thing you saw coming east into Denver from the west.  The US flag and Marine flag were prominent from every view!  The Eagle, Globe and Anchor on the face was donated by the Colorado School of Mines students.

Since then the area has been developed in a substantial way and the Memorial is in need of significant improvements.  You drive by and barely notice it.  To that end the USMC Memorial Foundation was formed and has developed (In conjunction with a Matrix Design volunteer architect) a basic Master Plan for the remodel of the Memorial.

The plan includes retaining the “Walk of Valor” that Memorializes the six Marine Divisions and 4 Marine Airwings; retaining the “Boulders of Honor” commemorating those who help Marines complete the mission – Chaplains, War dogs, Amphibious Units, Seabees, & a special boulder dedicated to the Women Marines Association with room for more.  The design includes a walk to a garden that will contain an All Services Monument paying tribute to our sister services, without whom we could do nothing.  It will also contain a walk to a garden that will commemorate the difficult “Walk Home” that Marines have had.  Both walks will host brick projects.  The forced perspective walk from the east point of the property to the actual Memorial will host raised gardens, benches, and figures of young people at graduating ages commemorating and telling the story of why we become Marines!  Their stories will be actual stories told by Marines.  There will be a flag for each state along that walk.  It culminates at the point that young person becomes a Marine and salutes for the first time!  A rifle squad salutes the Flag and the new Marine.  A large vertical feature on the west end of the property will be visible throughout the area.  The estimated completion date is Aug 2027.  More information can be found at www.usmcmemorialfoundation.org or on Facebook at USMC Memorial Foundation.

The Memorial has been managed and maintained since 1977 by the US Marine Corps Memorial Association; a subsidiary of the Department of Colorado Marine Corps League.  The Association has been merged with the USMC Memorial Foundation which is also a subsidiary organizationally and a stand alone 501 (c)3 legally.  All Marine centric organizations may join the foundation and are invited to attend meetings which will be posted on our facebook page and web site.

We are in beginning this mission and hope you’ll join us by contributing as a founding member on the web site above or find us on Facebook and donate there.  Checks are also welcome payable to the USMC Memorial Foundation (3066 So Granby St., Aurora, CO 80014)